Exhuming and Exalting: For Izzy

“There is one place that all the people with the greatest potential are gathered and that’s the graveyard.”

I got a carwash the day Izzy died. The Mistress had been covered in soot and street salt from our wisp of a winter, so I paid for the deluxe wash and got her tires shined and her undercarriage buffed. My car sparkled in the newness of spring. And then it rained. Without hint or warning from the weatherman, it rained a torrential downpour all over my clean car parade. This is the sort of thing that would have made Izzy laugh. With cynical resolve, she would throw back her head, brandishing her tongue ring, and let out a hearty “Ha! Perrrrrfect!” But, as I was getting my car washed, Izzy was leaving this earth.

“People ask me all the time—what kind of stories do you want to tell?”

She reached out a year ago, saying that she’d found my space. She’d read my personal blog and from my writing she concluded that I understood her better than most people ever would. She said that if she grew up to be half the woman I was, she’d be grateful. That was sweet, but impossible. We had our share of similarities, but my little cousin broke my feeble mold when it came to strength.And to be half the woman I was, she would have to cut herself down. Izzy was extraordinary in her kindness, in her ability to love relentlessly, in her loyalty. She was an artist, a writer, a tough girl, a beautiful human being with one million feelings expressed on her skin and through her pen.

This became our thing. I would write and write, and Izzy would pop up every now and then telling me she’d read my blog, that she’d been writing, thinking, feeling those things too. An electric gratefulness coursed through my veins at my newfound superpower: by digging through my own soul and telling my story, I was telling hers too.

“I say exhume those bodies. Exhume those stories—the stories of the people who dreamed big and never saw those dreams to fruition.”

A lawyer first, then a judge. That was her plan for her life. There was a magnet in Izzy’s crown that pulled her toward challenging and it breaks my heart that we only got 20 years to watch her run headfirst into the world.

Exhumation has adopted new meaning for me since Izzy was killed last week. I spent 19 hours that day grasping for things that would somehow keep her here. I went through the what if’s. I said this was impossible, that life wasn’t that cruel. I looked down into Izzy’s casket wanting to cut one of her curls, knowing that on that  afternoon, after her final service, much of Izzy would fall away.

The one thing that remained unscathed by Izzy’s fatal accident was her story. The same tragedy that mangled her body magnified her story tenfold. Some of this story is folded in the leaflets of her journal. Some of it is encrypted in cyberspace on her secret blog. Some of it has been deposited in the ears of her friends under the lock and key of a pinky promise. Some of it was interred under six feet of soil with her shell last week. Still more of it is unwritten, because I have yet to live it. Her spirit is forever braided into mine, and as long as I breathe, as long as I run headfirst into life, as long as I raise a pen to artistry, and love and freedom, as long as I tell my story, I am telling hers.

Next month, on April 22 Gabrielle Hickmon of The Reign XY and I will be exploring the idea of exhuming and exalting in person during our Sisterhood Soiree. Join us as we get past the business card BS and network in a truly genuine, authentic, cozy environment. Exhuming and Exalting will take place at The Capitol Hill Hotel, 200 C Street Southeast, Washington, DC 20003 on April 22 at 7:00pm.

Inspiration for this post drawn from Viola Davis and the beautiful life of Elizabeth Paige “Izzy” Bright.

“You know, there is one place that all the people with the greatest potential are gathered and that’s the graveyard. People ask me all the time—what kind of stories do you want to tell, Viola? And I say exhume those bodies. Exhume those stories—the stories of the people who dreamed big and never saw those dreams to fruition, people who fell in love and lost. I became an artist and thank God I did, because we are the only profession that celebrates what it means to live a life.” - Viola Davis 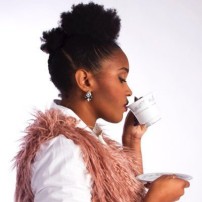 Roconia, founder of Moredinary, is a creative who loves storytelling, sunshine, and the color yellow. She feels really awkward typing in third person.

The Hairy-Armed Angel (& Other Stories of Sisterhood)